Sinclair began working for Marsy’s Law in 2017, with the goal of first, getting the issue on the ballot, and then passing the legislation as a constitutional amendment in North Carolina in the 2018 midterm elections. This required a 50% majority vote in favor.

Marsy’s Law would amend the state constitution to provide an equal level of constitutional protection to victims of crime that is already afforded to the accused and convicted.

If passed, the amendment would:

Before Marsy’s Law, victims’ rights protections were in North Carolina’s constitution, but were not applied the same way from county to county and there was not a broad, statewide, enforceable language equally outlined across the state.

WHAT WE DID
Branding Campaign, Logo, Website, Social Media

The campaign faced and successfully navigated several challenges. These included:

We aimed to increase awareness about the issue, and created collateral that served this goal. Though different in nature, the materials were branded similarly, with the purple backdrop and trademark logo of a capital “M” combined with a lit candle. 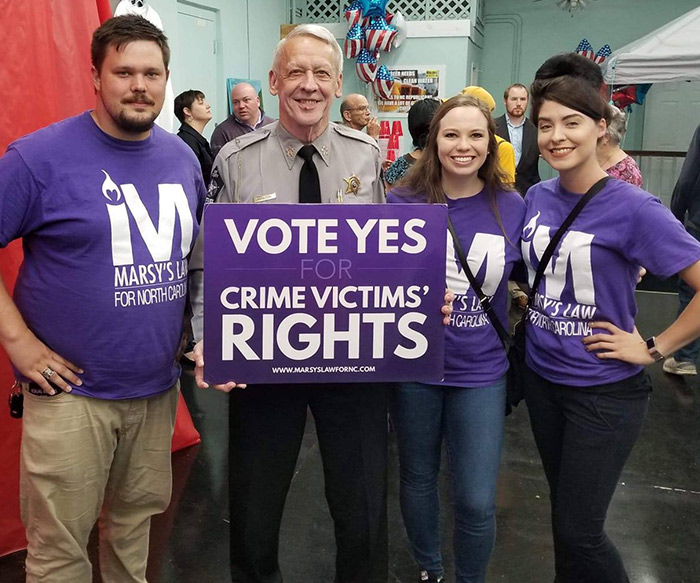 The Marsy’s Law Field Team was vital in getting the amendment passed. The team secured endorsements from community leaders and local, county, and state-level elected officials. To raise awareness, the team:

We created a qualified team that would serve as liaisons for groups affected by Marsy’s Law including judges, district attorneys, law enforcement, and victims.

Our team was comprised of

Without these teams and a strategic communications plan, Marsy’s Law would not have reached the ballot, let alone received approval by the state’s voters.

We created several print items, including a brochure that broke down the issue for voters. This source included answers to frequently asked questions, a list of rights that victims would receive if Marsy’s Law was approved and background on the heartbreaking story that inspired the amendment.

In March 2018, we updated the campaign website – marsyslawfornc.com – which included current activities and images from the campaign. The site included stories from N.C. victims of crime who shared why victims needed stronger rights.

Sinclair designed a series of advertisements that aired on TV, radio and digital platforms. The first TV ad ran in September and informed voters of N.C. crime victims’ lack of protections.

Digital ads were released in October that contained personal stories of N.C. crime victims who included family members of homicide victims, victims of random acts of violence at their workplace, and victims of domestic violence.

The brave personal accounts made clear the need for added protections for crime victims – such as being able to speak at court proceedings and receiving notification when the accused is released from custody.

The effort featured a rigorous social media effort designed to stay in front of legislators and in the public eye, by targeting tweets and posts toward representatives and the public.

After months of informing the public about Marsy’s Law, it was finally time for voters to make their decision in November 2018. The campaign proved a resounding success – 62 percent of North Carolina voters cast their ballots in favor of strengthening victims’ rights. Marsy’s Law garnered the most support of the six constitutional amendments up for consideration.

The law was debated and vetted with stakeholders for more than a year when it passed the North Carolina General Assembly with overwhelming bipartisan votes – more than 150 yes votes from Democrats and Republicans – in June 2018 to send it to voters for consideration.

Sinclair Public Affairs Founder Chris Sinclair faced breaking through the noise on a long and crowded ballot, and he, perhaps most notably, successfully maneuvered the campaign in a way that did not attack the opposition, but, rather, told the message of Marsy’s Law more effectively.

He orchestrated direct mail and digital campaigns coupled with social media takeovers that thanked Democrats for their support. This is especially important because Marsy’s Law is a national initiative that requires bipartisan support.

“North Carolina’s voters – Democrats, Republicans, and Independents – made their voices heard today. Voters chose to support important stronger rights for victims of crime – to give victims and their families an equal level of constitutional protections as the accused and convicted,” said Chris Sinclair, campaign director and founder of Sinclair Public Affairs.

Let’s Talk About Your Situation

Are you considering or working on an issue campaign? Dynamic issues demand dynamic solutions.